Ratites are a group of mostly large flightless birds whose sternum (breastbone) is smooth or raft like.The name Ratite comes from the Latin “Ratis” meaning raft. As ratites lack a keel to which flight feathers are attached, all species of Ratites are unable to fly.

This group,in order of size, includes the Ostrich, Emu, Cassowary, Rhea and Kiwi which are the only surviving species left although the Cassowary and Kiwi are now critically endangered. 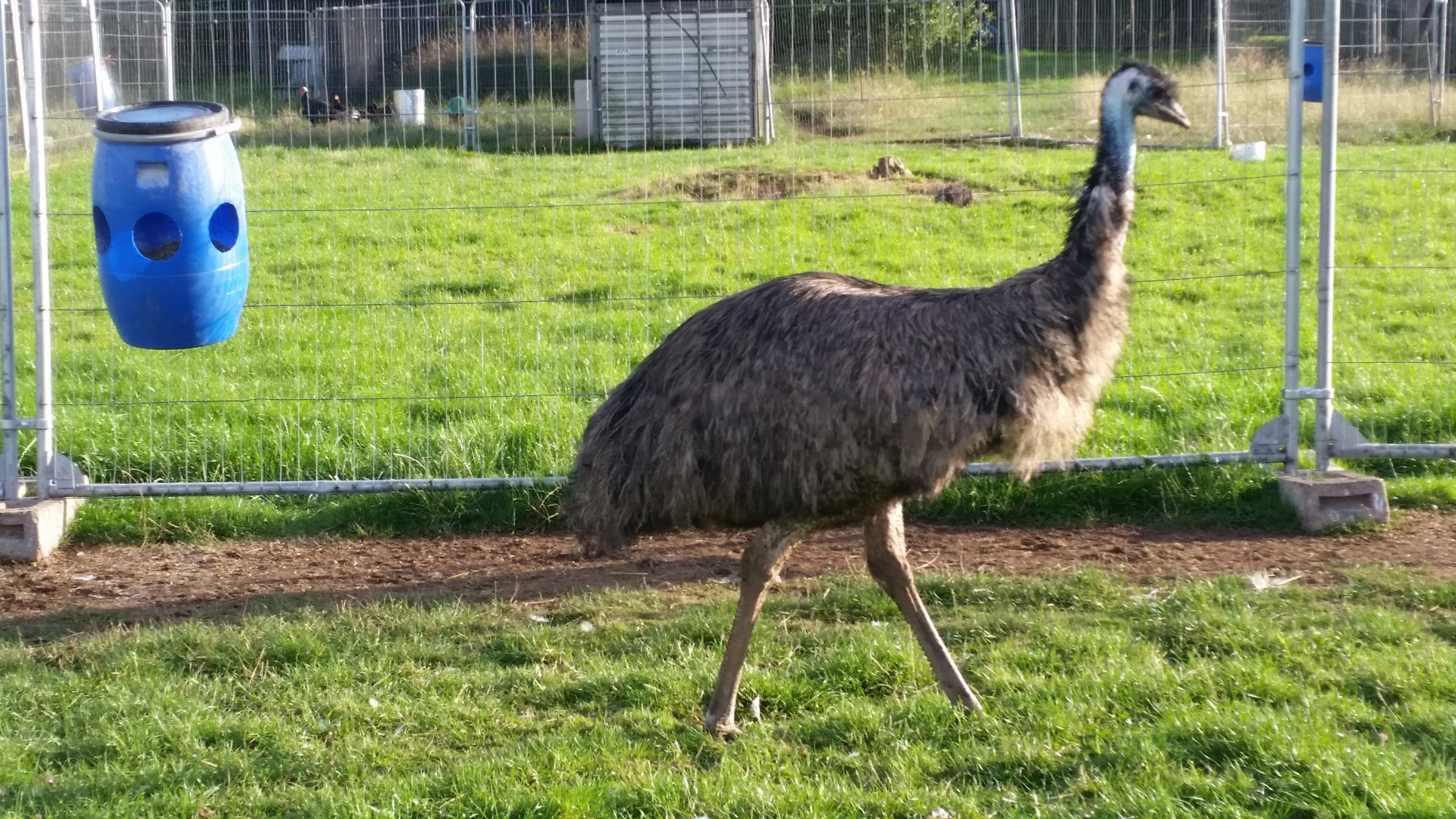 As we specialise in Emus and Rhea here is a little bit about their year:

Emu breeding season in the UK starts during the Winter months with the first eggs being laid from late November onward depending on weather conditions and will last until early April. Both parents will build a rough nest from whatever natural materials are available with the female laying one large egg at a time spread over many days.

The eggs weigh between 450 grams to 700 grams and are an incredible dark green colour. Incubation takes approximately 40 to 50 days to hatch whether naturally by the male or artificially in an incubator. The chicks are a dull brown striped colour to offer good camouflage from predators and are up and about fairly quickly.

As Emu breeding season draws to a close, Rhea breeding season starts up from March to September and follows a similar pattern to the emus with both parents nest building. However the Rhea eggs can be slightly larger in size compared to the emus and are white in colour with a faint yellow bloom that fades as the egg ages.The eggs take a similar length of time to hatch and rhea chicks are either grey, white or a mixture of both and follow the same developmental time as emus to reach full maturity.

Rhea size compared to Emus is much smaller, up to 4 feet in height and 25 – 40kg in weight. Like the emus they love to run and they were the inspiration for the cartoon character Road Runner! Unlike emus they prefer to be kept in larger groups and trios of one male to two females being an ideal ratio.They are generally quite calm and graceful paddock birds in a settled flock whereas the emus are like naughty children! The collective name for a group of rhea can either be a flock or also a mob.

At the end of both breeding seasons any infertile eggs are blown ready for sale as they are much prized by artists and crafters for painting and carving. Emu eggs have seven layers of colour in the shell and Rhea eggs can be finely carved into a beautiful lace effect.

The quieter months here are September and October when we and the ratites have our “down” time and prepare for the turning of the season yet again. 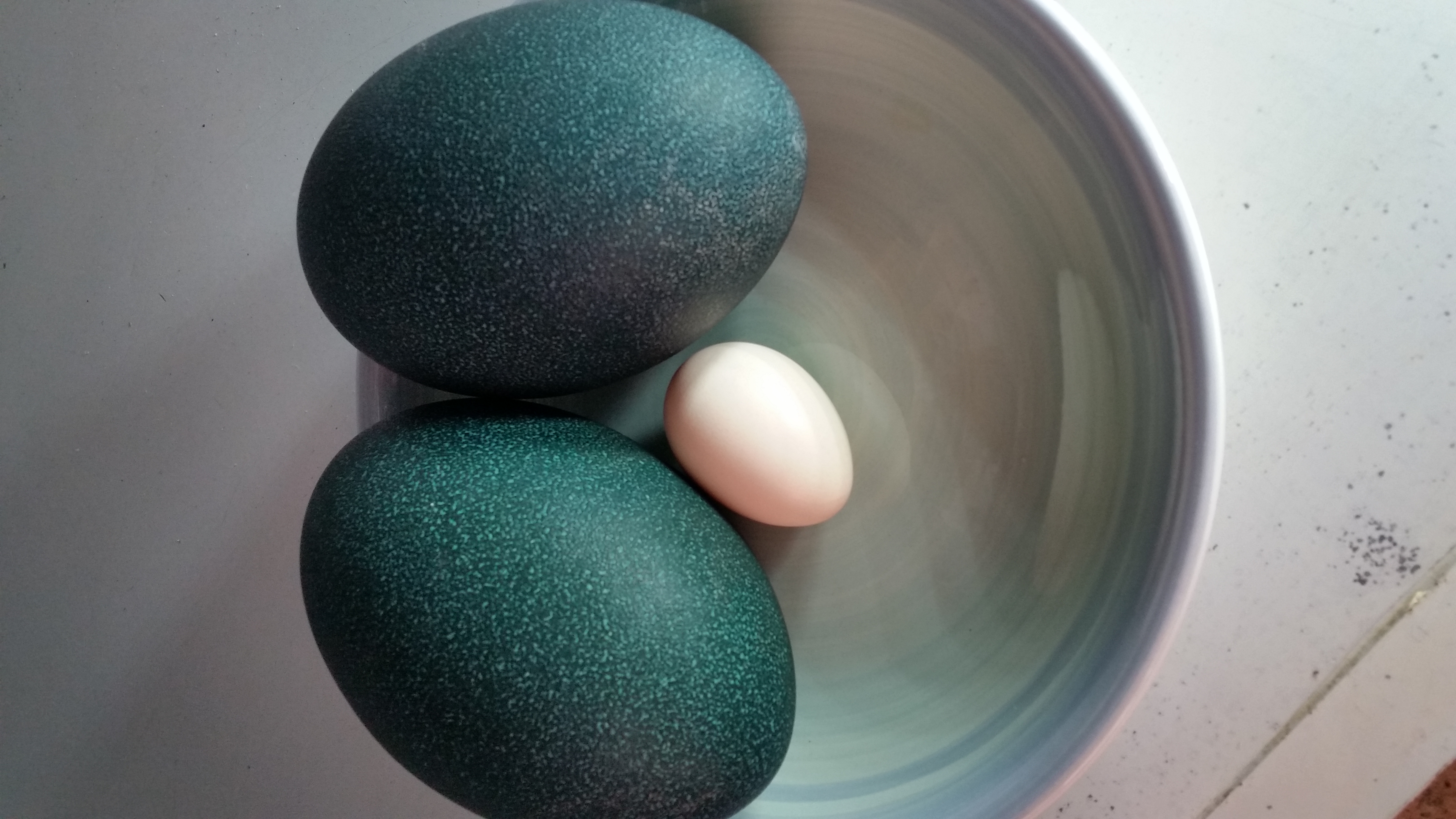 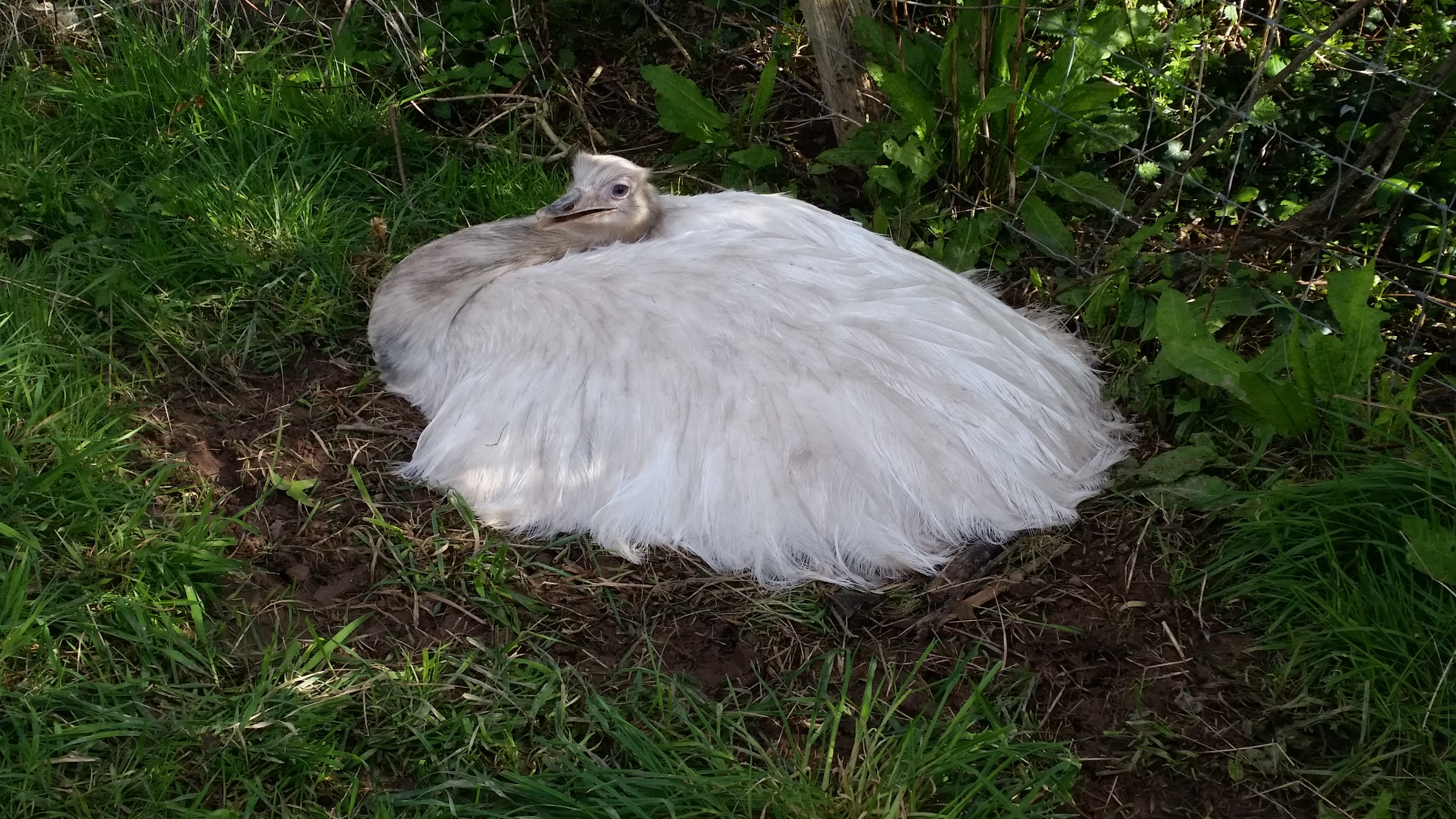 They have remained largely unchanged for over a million years and owning one is like having your very own dinosaur.Although each species comes from different parts of the World,the Ostrich from South Africa, Emu from three different regions in Australia, Cassowary from New Guinea & Australia, Rhea from South America and Kiwi from New Zealand,the Ostrich and Rhea are more closely related in evolutionary terms as are the Emu and Cassowary.

Ratites are one of a few species where the male does all the incubating and rearing of the young and will raise the chicks for the best part of the first year of their life. 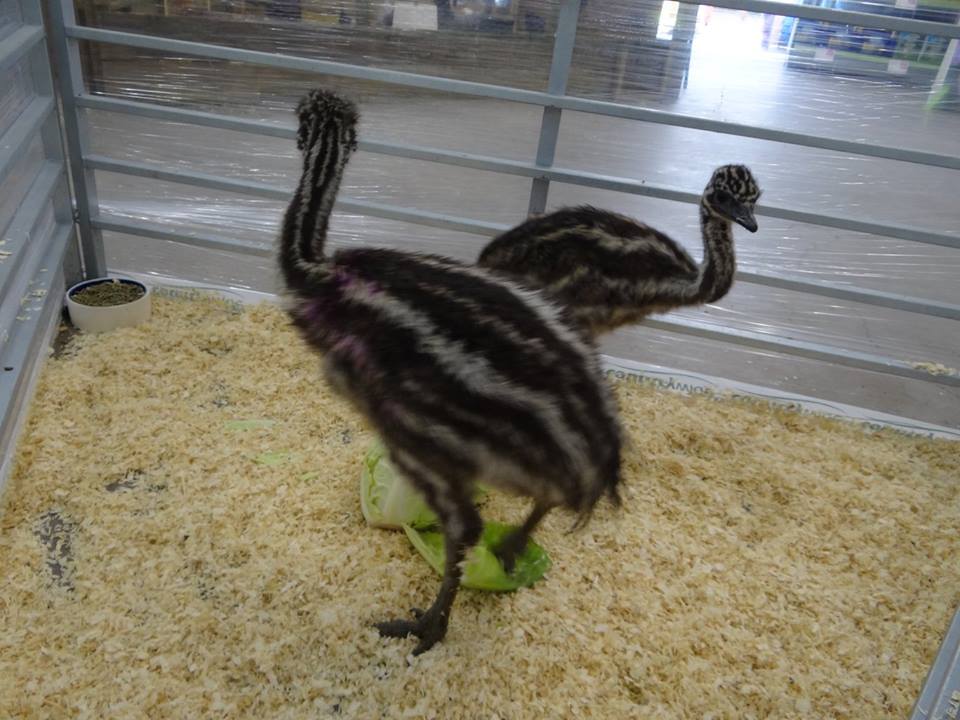 Emu chicks like all Ratites need time and space to grow.They are not considered sexually mature until around 2 years of age.

When they are fully grown adults they range in weight from 45 – 70 kg and from 5 – 6 foot in height .They are naturally inquisitive and playful and love to run reaching speeds up to 35 mph.The collective name for a group of Emus is a mob but adult emus prefer to be kept in pairs;even a pair of males will live happily as bachelors together. 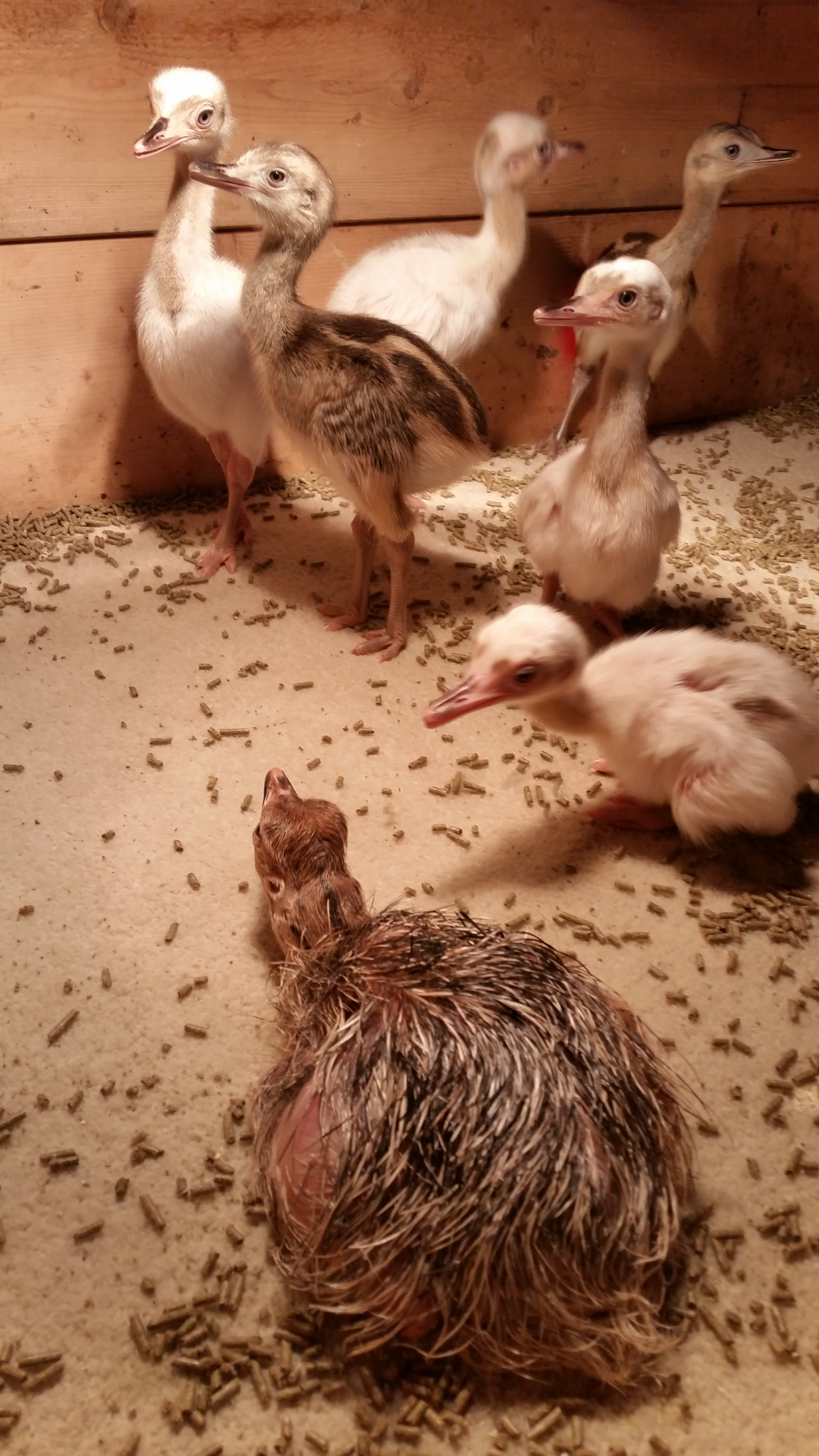